The beginning of language (On Becoming series)

A small book made from wax-covered paper resides in the throat behind a translucent fabric sculpture of a mouth and neck. Onto the book are projected images of birds flying out from the centerfold and then disappearing off the edges of the pages. As each new flight is initiated, a Sanskrit vowel is being whispered on the soundtrack. The birds fly out leaving trails of outlines of their earlier positions that dissolve briefly into mathematical formulae before disappearing. Each bird is mirrored rorschach-like on both pages, suggesting both vocal chords and vertebrae.

In certain India mythology, Sanskrit is thought to both represent and bring forth the manifestation of the universe. In this cosmology, consciousness, which is one, becomes aware of itself. The nascent duality created a vibration that brought forth the Sanskrit Vedas, the first manifestation to precipitate from oneness. 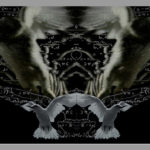 Return to series: Works on becoming