Seed formations (from On Becoming series) 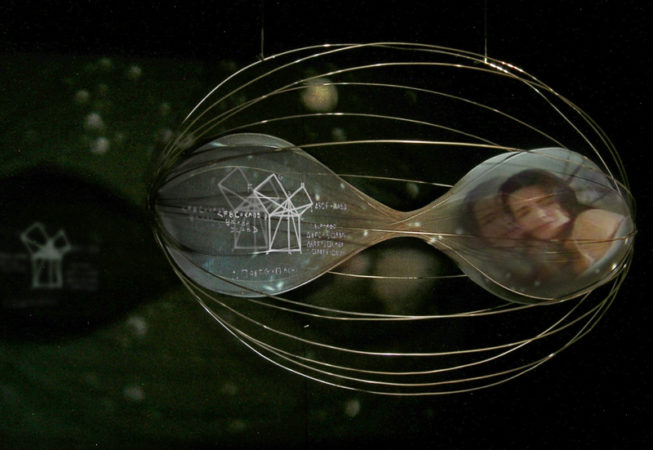 Video projection on sculpture.  28” wide, hanging 60” from the floor.

Might we wake up because of a distant starburst? Or could we be stirred by the pythagorean theorem floating into our world? Does the universe begin anew as we awaken? Such magical interweavings are suggested by “Waking,” one of the pieces from  Works on Becoming.

A wire sculpture, with interior shapes covered with sheer nylon, suggests seedpods, cell division, and more generally, an enveloping unity giving shape to a duality within, perhaps on a cosmic scale. The projected video starts with two eyes opening and closing and seeming to direct the starry sky surrounding the eyes. The stars appear when the eyes, open, shift when the eyes shift, and disappear when the eyes close. Later individuals awaken as a star bursts, or a mathematical formula drifts along, or cells multiply. Interspersed are scenes of effulgent life as well as hands playing string games, a simple visual metaphor for bringing forth form.